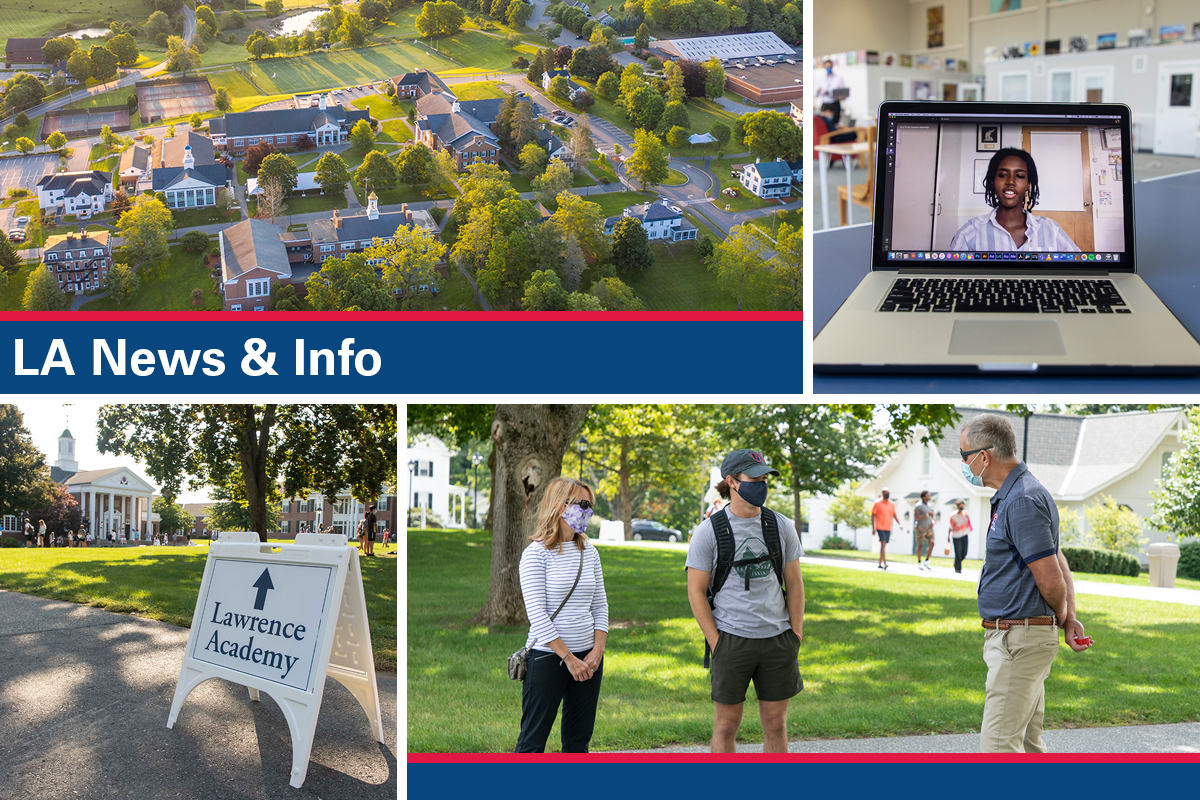 <Back to News
Senior Speakers

Rather than focusing on speeches by a valedictorian or salutatorian, LA tradition puts the responsibility of speaking on behalf of the graduating class to a vote. Haley Gowland, the senior girl chosen by her classmates to speak on their behalf, focused on the children's movie, 1994's The Sandlot, as she reminisced about her time on Powderhouse Road.

"In the movie, the main character, Smalls, is the new kid, and meets a bunch of baseball players. When they lose an autographed baseball over the side of the fence, none of them dare to go over and get it. They all think that a monster, whom they call 'The Beast,' lives back there," said Gowland, who alluded to high school’s beast—the unknown.

"I remember being painfully quiet right off the bat. People were being nice to me, and I told myself, 'Don’t you dare mess up this first impression.' I could not relax enough to 'risk' being myself,” said Gowland. "By the end of the fall, I was making little goals, like telling myself to sit at a certain table at lunch the next day.

“I wanted more than anything to be known for who I was already. Like Smalls, all I wanted was the ball back, but I was over-thinking things."

Haley said that by simply trying new things and being herself, she was able to conquer LA's version of the beast.

"Suddenly, I was a senior and something had clicked,” she said. “I actually felt like people knew me for who I was. It took me forever and I took the longest route to get there: I played every sport this school offers and I realized I was happy being artsy.

"I ended up taking a million of the risks offered at LA and they added up. All of a sudden, there were plenty of tables I could sit at for lunch and dinner."

To Haley, that's the beauty of her experience at Lawrence Academy.

"If Smalls had jumped over the fence, patted the dog on the head, and lobbed the baseball over, The Sandlot would be a terrible movie," she said. "So, I want to thank LA for giving me three years of trying to get the ball back.

"Three years of ups, downs, mistakes, being awkward, musicals not just music, locked doors, doors held open (literally), and of meeting friendly people who only knew me by 'Cranks Girl'."

For many people off campus, this year's boys' speaker is known for a single dunk during the last basketball game of his senior year. But those people at LA who have gotten to know Joey Mullaney know that he represents much more than two points.

"While at LA, in assemblies, classrooms, and sports, we are told LA’s mission for its students, 'Lawrence Academy recognizes you for who you are and inspires you to take responsibility for who you want to become.' I have heard that quote about 200 times in my career at LA and have ignored that quote 199 times," began Mullaney, who wore a wide smile throughout most of his remarks. "Every time I heard it, I rolled my eyes because I was so sick of hearing it. However, the last time I heard it was at a recent Monday morning assembly when Mr. Scheibe said it.

"I don’t remember why he even said it, but when he did, a light bulb went off in my head and I said to myself, 'That quote actually makes sense, probably should have tried to listen to it before.'”

For Mullaney, who fights a nervous system disorder (Friedreich's ataxia), simply getting to class can be a struggle. But even as his condition worsened Joey refused to open up.

"I never wanted kids to feel bad for me because I wanted them to treat me like a regular kid, which made it hard for me to open up and talk to my peers at school and outside of school," he explained. "I have had some struggles throughout high school, but never at LA.

"Mainly my troubles have been in public away from LA. I walk differently, so wherever I go strangers stare at me and say things under their breath. This used to make me afraid to show myself too much to people.

"However, at LA it was always different. Right from the start of my freshmen year, I felt like people wanted me to be myself. People respected me and treated me the same as they would anyone else."

That was important, especially when his struggle reached new heights in September of his junior year and Joey's twin brother Sean (also a member of the class of 2013), his advisor Mr. Culley, and Dean of Students Mrs. Margraf told the entire student body about the progression of Joe’s disease.

"After that, people knew more about who I was and accepted me even more for me, which allowed me to fully accept myself for who I am," said Joey Mullaney, who explained that he then focused on taking responsibility for who he wanted to become.

"Over the past four years, I have had to give up on that dream of being Kobe Bryant. Instead of that dream, I have had to create a new one that fits with my life. One of my newest dreams has become motivating others through my story," said Mullaney.

"I first realized this dream could come true this past winter when I ferociously slam-dunked the basketball at our final senior home game. Of course I was on Daquan Sampson’s shoulders, so I was about eight feet in the air, and then I grabbed the rim and pulled myself up to 11 or 12. Luckily, Jalen Myrie, Darrien Myers, and my brother Sean were spotting me. Being up that high was pretty terrifying, but I toughened up and, with the help of my teammates, I scored my only two points for Lawrence Academy.

"My older brother Ryan videotaped my moment of glory and posted it on YouTube. Many people commented on the video with positive and negative feedback, but one comment that stood out to me was, 'This is what life’s all about.'"

So now, as Joey prepares to move on to college, he is focused on how his own story can motivate others even as he takes inspiration from the LA community.

"You guys always kept me going even when times were hard. And through your support and encouragement, I chose to never give up," he said.