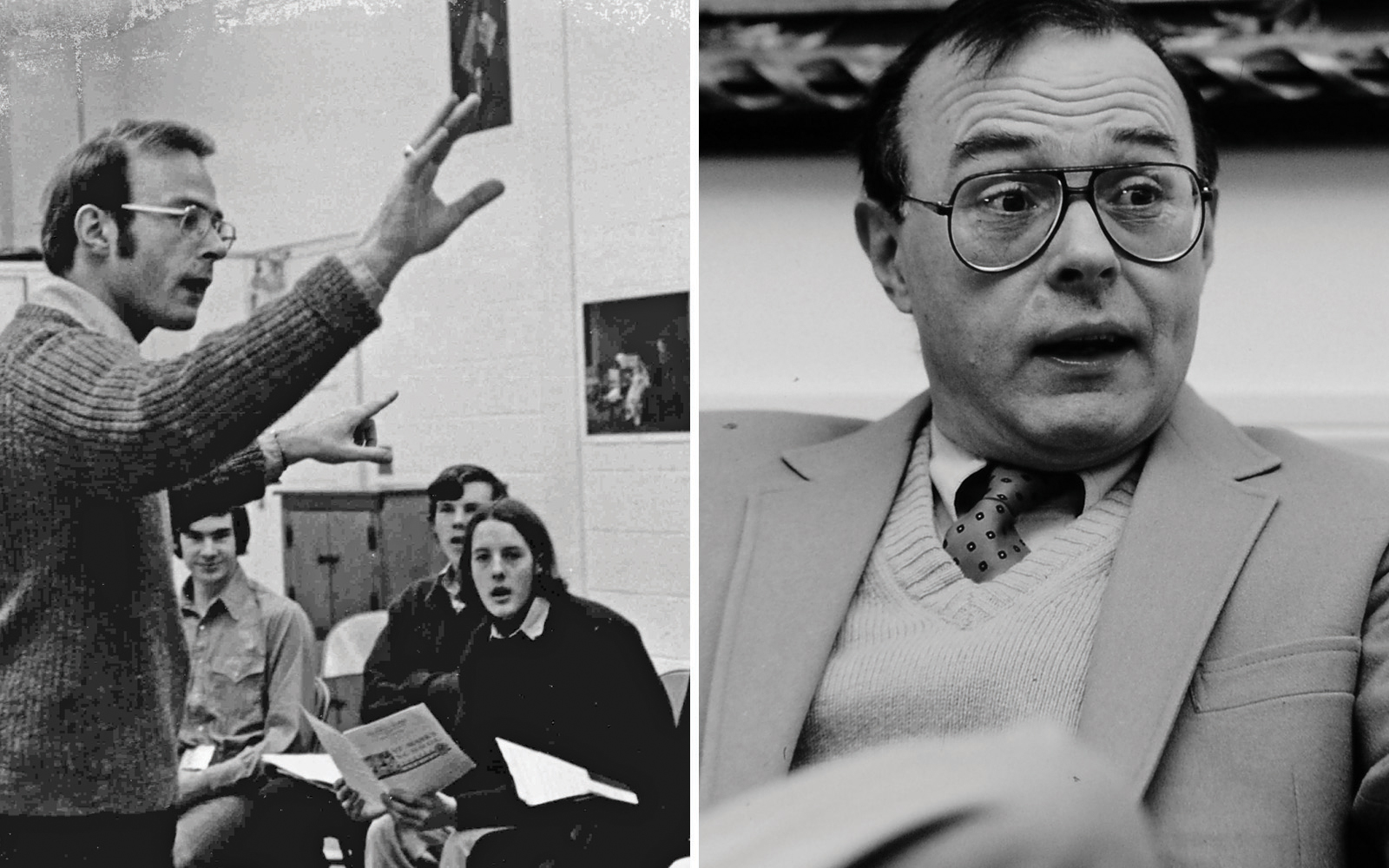 Ah, the holidays! Hear the snow crunch, See the kids bunch…and try to get them to do any work between Thanksgiving and winter break. But return with us now to those thrilling days of yesteryear…

Back in the day, before Winterim, the first trimester ended with Christmas vacation (which, incidentally, was a little longer than it is now). That meant that there were EXAMS before the break — which gave the faculty some semblance of Damocles’ sword to dangle over their students. We teachers, of course, were just as sick of school by mid-December as the kids were, and we couldn’t start vacation until the exams were corrected and grades turned in. We used to joke about the old stairwell trick — throw the pile of exams down the stairs and give the highest grades to the ones that land near the top — but mostly we just plodded through with the aid of a lot of coffee. I used to envy Jack Burckes, whose history exams were always multiple-choice. He had an answer grid, just a copy of the answer sheet with holes punched over the letter indicating the correct response. He’d lay the grid over an exam, count up the right answers in two minutes, turn it into a grade, and move on. Grrrr.

One year, early in my career, Alan Whipple and I, who each taught a section of French 1, decided we were sick of hard-to-correct term exams, so we decided to take a page from Jack’s book and use a multiple-choice final. Being the junior member of the department, I was elected to make up the exam, which would be given to all sections of the course. I did so, and we corrected it in no time. I never told Whipple that it had taken me about 72 virtually sleepless hours to make the thing up. You try inventing 250 multiple-choice French grammar questions based on four chapters of a beginning textbook!

Winterim came along, moving the first-term exams to November, but the pre-vacation battle for young minds goes on. Plus ça change…

Adolescent Recalcitrance Syndrome isn’t the only LA holiday tradition that has endured through the years. There are nicer ones, including Ned Mitchell’s annual reading of Truman Capote’s A Christmas Memory, a fond recollection for generations of alumni. Graduates from the old days may remember that before Mitch and Truman, there were Fergie and Charles: Arthur Ferguson used to read Dickens’ A Christmas Carol to the entire school. In those days, everyone could fit into MacNeil Lounge. The lights were soft, the fire was lit, the kids sat on the floor while the old folks occupied the chairs around the periphery of the room. It was a lovely family gathering. My first year, unfortunately, was the last one when the whole school could fit into MacNeil. For Ferguson’s last year or two, the event was moved across the lobby to the gym. Even with the standing lamps from MacNeil and a few pieces of furniture placed up front, sitting on hard folding chairs wasn’t the same as curling up on the rug in front of the fire.

And then there was the annual Christmas Concert, which has long since morphed into an inclusive celebration of the whole holiday season. At some point in the early 1970s, a group of us teachers decided that that event was getting far too serious and, frankly, pretty dull, so, in good New England tradition, we resolved to Do Something About It — and the Musicians au Groton were born. You can read the grisly history of this group of otherwise-respectable members of the Lawrence community in Shep’s Place #19, “Music Hath Charms (usually),” so I won’t elaborate here. Suffice to say we changed the face of the holiday concert for several years, until someone decided it wasn’t serious enough. Alas, the Musicians au Groton…

…live on (like it or not)! When Tanya and I were cleaning out our collection of old cassette tapes not long ago, we unearthed a recording made in 1974 by Jim and Kay Draper. Jim was a founding member of the group, the lead bass, and a wicked alto sax player. If you click here, you’ll be treated to (or for) a couple of the group’s Christmas favorites, plus, in between, one of our mercifully rare attempts at a cappella singing, featuring the golden baritone (and fabulous Boston accent) of none other than the late Bobby Kullen. Jim Draper provides the introduction.

On that note, I shall leave you until next time. Have a happy and safe holiday season!