A Brief History of Lawrence Academy 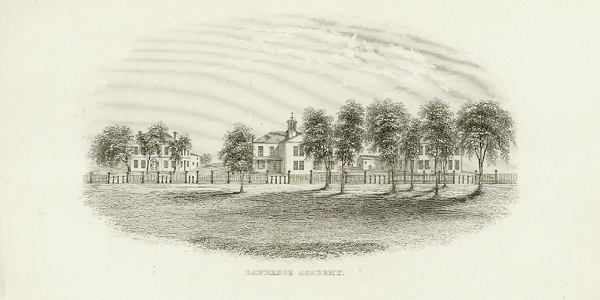 On March 26, 1792, leading citizens of Groton and the Board of Selectmen signed a subscription list to found an academy. (See the image below) The following year, Groton Academy was incorporated when John Hancock signed the first charter. Thus began the story of an independent, co-educational school typical of its day. Over the next 75 years, during the height of the academy movement, the school not only changed its name to Lawrence Academy, in honor of generous bequests by brothers Amos and William Lawrence, but also enjoyed a reputation, both locally and nationally, for providing education of high quality to a diverse constituency of college-bound students.

During the closing decades of the nineteenth century, however, enrollment slowly declined. Competition came from the increasing number of free high schools that served the needs of the growing population as well as from the growth of single-sex and church-affiliated schools catering to the needs of a wealthier clientele. The majority of the “academies” died out, were absorbed by their towns as high schools, or were converted into more specialized schools. To survive, Lawrence closed for one year, re-opening in 1900 as a non-sectarian, boys’ preparatory school. The restructured Academy did not quickly prosper, however, and might well have closed were it not for a large sum of money willed by a caring benefactor, Dr. Samuel Abbott Green. He was not only an alumnus and the nephew of Amos and William Lawrence, but a trustee and the grandson of one of the Academy’s founders, Samuel Lawrence.

From 1923 to 1958, under the leadership of Fred C. Gray, the school gradually expanded, largely by providing juniors, seniors, and post-graduates with a sound pre-college program. In the late 1950s and ’60s, with Arthur Ferguson as headmaster and Norman Grant as the prototypical all-around boarding school master, the school enjoyed a period of significant growth in both the number of underclassmen and in physical resources. The curriculum and athletic program were also updated to meet the needs of the day.

By 1969, when Benjamin D. Williams III arrived as Headmaster, the school had developed a fine plant and begun to accrue a modest endowment. In 1971 Lawrence Academy reclaimed a part of its earlier heritage, again opening its doors to female students. It quickly achieved approximately the same male-female and boarding-day ratios that it had enjoyed during its nineteenth- century heyday, although both the student body and the faculty were much larger. The 1970s saw major programmatic and curricular changes as well as increased stability of faculty and staff. The Headmaster, trustees, and faculty sought to develop a program that was

distinctive and spoke to the educational needs and market of the time. Winterim and Lawrence II (now known as the Independent Immersion Program, or IIP) evolved; elective courses and independent study appeared. Lawrence joined the Independent School League, and the school made a strong commitment to the arts both as part of the curriculum and as afternoon activities.

Through the 1980s, as Steven Hahn succeeded Mr. Williams, the school increased its commitment to diversity with a formal program for international students and a growing awareness of multi-cultural issues. A long-range plan in 1986 identified arts, athletics, and dining facilities as top priorities, and an $8 million capital campaign led to the Stone Athletic Center, the Williams Arts Center, and major improvements to the dining hall.

Lawrence marked its bicentenary in the 1992-1993 school year with an original musical play, fireworks, and a celebration that brought together the largest-ever gathering of LA students, parents, faculty, staff, and alumni. The school celebrated its history with displays of photographs and memorabilia (though much had been lost in a 1956 fire), and Douglas A. Frank '68 published the school history. The Parents’ Association became a strong source of both support and involvement, and with an expanded development staff, there were renewed efforts to involve alumni of all ages in the life of the school.

Meanwhile, the school re-thought ideas about how and what students should be learning. The result was a student-centered, skills-based curriculum with considerable interdisciplinary work.  This new structure involved teachers working together, and students learning to take responsibility for themselves and their education. The NGP (Ninth Grade Program) and the sophomore CSC (Combines Studies Course) joined Winterim and LA2/IIP as signature curricular programs. These innovations helped to create unprecedented demand for admission, leading to an increase in the size of the ninth grade from 60 to 80 students and to a total school population of about 380.

Over the last twenty years, through the terms of Heads of School Steven L. Hahn, D. Scott Wiggins,  Interim Head Gregory Foster, and current Head R. Daniel Scheibe, Lawrence Academy has continued to advance both the academic programs and the physical plant of the school. A tradition of academic excellence continues to be a hallmark of a Lawrence Academy education, and the faculty, forever seeking new approaches and drawing on new materials, are as committed to their own professional development as they are to investing in the success of all of their students.

A complete history of Lawrence Academy was published in September, 1992, as the school began its bicentennial year. Researched and written by Douglas Frank ’68 and based in part upon the research and work of former faculty member Alan Whipple, the book is a fitting tribute to the school and the people who have been part of it.