A Grand Slam for Spartan Baseball

For fans and players alike it’s a disastrous combination. Add to that cold temperatures and wind and it’s downright unbearable.

Those were the conditions for most of the spring sports season for all teams playing in the Independent School League (ISL). The Lawrence Academy baseball team, however, remained focused on one goal: playing good, solid, fundamental baseball…no matter what the weather conditions.

Good and solid proved to be an understatement for how the Spartans played all season. They persevered against all teams and through all weather conditions, never giving up more than 6 runs to any team.

Yesterday the baseball team finished their season in fitting fashion. Almost as if they willed the sun to come out to shine on their final game against Rivers, the Spartans played the same consistent, quality baseball they’ve played all season, beating Rivers and sowing up the ISL championship with an undefeated league record of 15 – 0.

“It’s extremely rare,” said head coach Chris Margraf, “for a team to go undefeated in this league. It’s only happened three or four times. There are so many quality teams in the ISL.” Margraf pointed to the unusual make up and chemistry of this year’s team. “I’ve been coaching for 14 years and have been part of many sub-.500 seasons as well as seasons where we’ve only won one or two games. The guys always played with heart and a passion for each game. We had that same commitment and passion this year but the difference was that we had all the right pieces to the puzzle.” 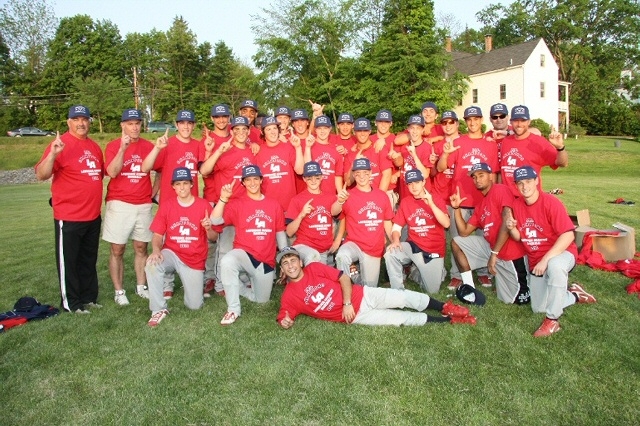 That puzzle included several players who will be attending division one schools where they will be playing baseball as well as a wonderful supporting “cast of characters” as Margraf affectionately calls them. “We just gelled perfectly this year. We had a combination of bonafide ball players as well as guys that were willing and talented role players.” In addition, Margraf also sites the rise in quality of multi-sport student athletes coming through Lawrence Academy. Senior Dan Giovacchini a perfect example. He played football, basketball, and baseball, and had the unprecedented privilege of leading those three teams to undefeated championship seasons. “We had many guys on the team this year like Dan who also played football, hockey, basketball, and soccer. They are good, all around athletes and know how to be competitive and more importantly work together as a team.”

Team chemistry is something the Spartans had in spades this year. The support for one another was obvious, from senior Joe Napolitano who, beginning in his sophomore year, was instrumental in helping to attract key players to the Spartan team to senior Tyler Beede, the pitching phenom who will likely be drafted in early June, to the many position players who practice and play hard, day in and day out. “The team this year was especially unusual in that they could truly think beyond themselves and do what they had to for the team.”

That unselfishness, combined with the raw talent and passion of all the players, led to a memorable season for fans and players alike. Although the Spartans will lose nine seniors this year to colleges and universities like Brown, Wakeforest, Vanderbilt, Union, Boston College, Villanova, Highpoint, Iowa, and UNH, they will never forget the unique opportunity they all shared in creating a true team that succeeded in not only winning the ISL championship but doing it without losing a game. Congratulations to the Spartan 2011 baseball team. Job well done!

And thanks for bringing some sunshine to our soggy spring!