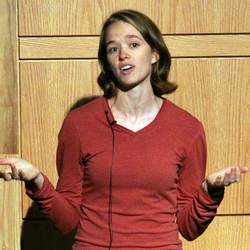 How could high school students take 500,000 cars off roads in the United States? According to Rouwenna Lamm, a presenter for the Alliance for Climate Education who spoke at Lawrence Academy on Thursday, September 24, the answer is by having each of the 22 million students nationwide install three energy-efficient light bulbs. Sixty-six million light bulbs equals 500,000 cars—it's that kind of math that helps any audience see the light in a world otherwise discouraged by images of a crumbling Polar ice cap and of bears stranded on ice floes.

Providing a fast-moving narration to accompany an informative and entertaining animated video presentation lasting 40 minutes, Rouwenna shared precisely the kind of information that students might need to understand the basics about climate change and how they could be the driving force behind changing policy worldwide.

She began by noting that each American teenager needs approximately 20 football fields of "space" on the Earth to support a habit of "living large." In part as a result of such lifestyle choices made by too many, human consumption worldwide has led to a tipping point, she explained: growing carbon dioxide emissions are warming our atmosphere; the supply of such fuels, which took millions of years to be produced, is shrinking; too little pressure is placed on further developing green energy technologies; and the number of "carbon sinks" (like forests) that absorb carbon dioxide is also shrinking. Add methane produced by cows, which feed our appetites for meat and dairy products, and it's no wonder that we have seen the 10 hottest years in human history, she said, and 1,000 times the normal rate of species' extinction. Estimates predict that the Earth will see 150 million "climate refugees" in the next 40 years, she said.

In discussing where solutions to such problems might come from, she reminded her young audience that the human imagination has historically been a powerful force for change.

In becoming part of the carbon-reducing solution-by changing light bulbs, using fewer resources in general and consuming more locally produced foods in particular-each student could grow larger "green prints" and, by serving as living examples of responsible practices and influencing public policy with their ever-growing purchasing power, students everywhere could help the Earth's population reduce its carbon emissions to zero over time. They can begin, Rouwenna said, within their own spheres of influence as teenagers.

For Beth Penney, the leader of the Go Green! Winterim who was recently named LA's coordinator of sustainability initiatives, the assembly was a great way to open the door wide to student involvement in the school's work: The assembly was a great way to kick off LA's work to become more sustainable. It was also a good review for some students and new information for others. I chose ACE because they want not only to educate but also to promote the idea that youth can make change happen. ACE has a powerful message and good resources to support us as we focus our efforts on becoming a more sustainable community."

In addition to making resources available to help students bring about change in their own schools and communities, ACE offers college scholarships as large as $2,500 to support students who demonstrate that they are agents of change in the field of climate education. Among students featured in a video section of the presentation was Alec Loorz, who authored a now widely circulated "Declaration of Independence from Fossil Fuels," written in the language of the 1776 document and produced in a Colonial-era script. He was 15 years old at the time; he now serves as the youngest presenter for Al Gore's Climate Project.

One of three New England presenters for ACE, Rouwenna majored in astronomy and physics at Smith College, where she earned her degree just before attending Power Shift 2007 in July. She discovered her own place in the network of people dedicated to climate education outreach as one of 5,000 college and high school students at that conference, and before long was organizing her own, Massachusetts Power Shift, in 2008. Soon after, following an opportunity to do outreach for the Union of Concerned Scientists, she landed her "dream job" working for ACE. In earning her degree at Smith, she said she was expected to learn how to communicate information about scientific findings to non-scientists.