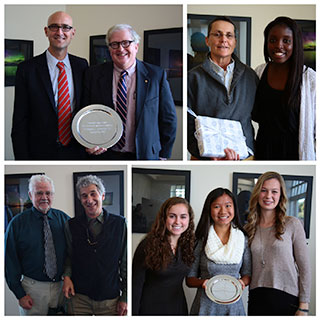 Our 20-word School Mission is followed by a three-part “Calling,” in which we express our intention to fulfill the mission by calling on each other “to take action for the common good.” On October 23, we celebrated those within our community who exemplify such action at Founders’ Day, reflecting on the School’s rich 223-year heritage by acknowledging faculty and staff with 25 years of service to the School and recognizing three individuals who strive to make LA and the world a better place.

The second award, the Kathy Peabody Memorial Book Award, recognizes a non-teaching member of the community who helps to create a secure and positive environment in which everyone at LA may achieve their best. Each year, student leaders select this book award recipient, and this year they selected Carole Figgins in the Building and Grounds Department, citing her efforts and care in keeping our campus safe and beautiful.

Receiving recognition for 25 years of service to Lawrence Academy, our Director of Technology, Mark Burkholz, was lauded by his good friend and colleague, history teacher John Curran, who talked about Mark’s accomplishments, among them introducing the “flipped classroom” to our math department. When Mark started at LA in 1991 there were no cellphones, emails, or apps! Over the past two and a half decades, he has continuously brought cutting-edge, technological innovation to the Academy.

The Founders’ Day Award, which is the school’s highest honor, was awarded to Richard A. Johnson ’74 for all he has done for LA on and off campus. He was one of the creators of the LA Athletic Hall of Fame; he conceived of and has stewarded the Tom Warner ’75 Endowment Fund and Reunion Fun-Run, and he has been a sparkplug, keeping classmates together and supporting LA. Rich is the curator of The Sports Museum, which is located in Boston's TD Garden. In his remarks, Mr. Scheibe confirmed the legend that Rich first started curating in Sheedy Hall back in the 1970’s, collecting keepsakes in his room, which he turned into a de-facto museum that classmates visited to see sports memorabilia and even artwork – posters of Bobby Orr and Willie Mays, a Winslow Homer, and Massachusetts political cartoons.

I’ll be back in touch in November.

BTW: Next week features the LA Arts Showcase, which will include visual arts, along with performances from dance, music, and theater. Check the LA calendar for dates and times. The play, An Iliad, is a customized version of the epic tale, which is tackled by an ensemble of student actors and crew. I hope alumni and friends will join us for two upcoming events. First will be our Boston gathering at the Hampshire House on Thursday, November 12, which will be followed by an alumni sponsored grilled cheese truck (Roxie’s) at our under-the-lights football game on Saturday, November 14 at 5:00 p.m. against Brooks. And for those of you who remember Denny Blodget, who was assistant head of school from 1987 – 2004, you may be interested to know that he has compiled a collection of his speeches given to the student body: Dead Man Talking paperback copy (Amazon) or eBook (Kindle).